This section is intended to provide a brief overview of our disciplinary process. Under Part IX of the Securities and Futures Ordinance (SFO), the SFC is given power to discipline those that it licenses or registers, comprising firms and those who perform functions for them which require a licence or registration including those involved in their management1 (together referred to as “regulated persons”). If the SFC finds that a regulated person’s conduct suggests it is guilty of misconduct or not fit and proper, the SFC may impose sanctions selected from a range set out in the SFO. This section explains how we go about this process.

1The SFC also disciplines under the old law in relation to conduct which occurred before the commencement of the SFO on 1 April 2003 by virtue of certain transitional provisions in Schedule 10 of the SFO.

The SFC’s disciplinary process is explained in the sub-sections below:

Why does the SFC discipline?

Under the SFO, one of the SFC’s functions is to protect the interests of investors and to maintain market integrity. One of the ways we do this is by enforcing the law through imposing disciplinary sanctions on regulated persons. Through discipline, the SFC ensures firm and appropriate action is taken against those who harm investorsor damage market integrity, regardless of their position and status. The threat of sanctions being imposed by the SFC serves to deter non-compliance with regulatory requirements.

It is of paramount importance to us that all regulated persons are treated fairly in the disciplinary process. When making disciplinary decisions, the SFC will have regard to its previous decisions while taking into account the specific circumstances of each case. However, the Securities and Futures Appeals Tribunal (SFAT)2 has ruled that the SFC may disregard previous decisions where changed circumstances warrant it. The SFC will adjust its penalties from time to time in light of various considerations it deems relevant to the discharge of its statutory duties and to changing market circumstances, particularly market participants' behaviour. The SFC aims at all times to impose sanctions which are proportionate to the gravity of the improper conduct.

2 See sub-section "Disciplinary process" for a discussion of the role of the SFAT.

Who is subject to SFC disciplinary action?

3 Based on the SFC’s Circular to Licensed Corporations Regarding Measures for Augmenting the Accountability of Senior Management dated 16 December 2016, an MIC refers to an individual appointed by a licensed corporation to be principally responsible, either alone or with others, for managing any of the following functions of the corporation: (i) Overall Management Oversight; (ii) Key Business Line; (iii) Operational Control and Review; (iv) Risk Management; (v) Finance and Accounting; (vi) Information Technology; (vii) Compliance; and (viii) Anti-Money Laundering and Counter-Terrorist Financing.

The SFC will consider all the circumstances of a case, including:

The criteria listed above are not exhaustive.

Disciplinary measures available to the SFC

The SFC is empowered to impose one or more of the following sanctions:

All the SFC's sanctions, other than a private reprimand, will be published by means of a press release. All press releases on SFC enforcement actions, including disciplinary actions, are available under "News and announcements" - "News" -"Enforcement news".

To better understand our considerations when imposing a fine, please refer to the SFC Disciplinary Fining Guidelines published in February 2003, which can be found under "Rules & standards" - "Codes & Guidelines" – "Guidelines". 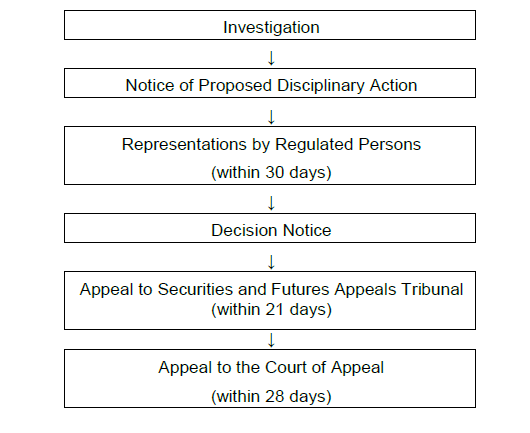 The SFC investigates acts that suggest misconduct or that call into question the fitness and properness of a regulated person. The SFC may initiate an investigation on the basis of information from any source, including the public, other regulators or law enforcement agencies in Hong Kong, such as the Hong Kong Monetary Authority, the Hong Kong Police, Hong Kong Exchanges and Clearing Limited (HKEX), foreign regulators and internal referrals. Internal referrals may arise from our monitoring of day-to-day trading in the stock and derivatives markets, from our inspections of intermediaries or from investigations into other matters, such as civil market misconduct or criminal offences. Following the investigation, we will consider whether or not there is sufficient evidence to commence disciplinary proceedings.

Our disciplinary investigations should not be confused with those of other bodies, such as the Hong Kong Police or the Independent Commission Against Corruption, who investigate suspected criminal behaviour, or other bodies with the power to discipline, such as HKEX.

An NPDA is sent to a regulated person if the SFC decides to start disciplinary proceedings.  The NPDA sets out our preliminary views on the misconduct or conduct that calls into question the fitness and properness of the regulated person. It also states the sanctions we consider appropriate to impose on the basis of the facts as we understand them at the time.

An opportunity to be heard

A regulated person may wish to get legal advice, which may include instructing their lawyer to make representations to the SFC on their behalf.

Request for evidence when making representations to the SFC

In the course of disciplinary proceedings, if fairness in the circumstances demands, we may invite a regulated person to attend a meeting to clarify certain issues even without an application from that person.  We may notify a regulated person of our decision to hold a meeting in these circumstances in the NPDA or after receiving written submissions.

The decision notice will also include information on the regulated person's right to appeal to the SFAT against the decision.

Cooperation with the SFC

In deciding on the final sanctions, the SFC will consider whether the regulated person cooperates with the SFC. In appropriate circumstances, the sanctions may be reduced depending, amongst other things, on the timeliness, nature and degree of the cooperation.  For more information on our approach to cooperation in disciplinary matters, please refer to the Guidance Note on Cooperation with the SFC published in December 2017, which can be found in the "Rules & standards" - "Codes & Guidelines" – "Guidelines" section of the SFC website.

Appeal to the SFAT

The notice to the SFAT must set out clearly the grounds for the appeal and should be delivered to the Secretary to the SFAT at:

Effective date of a decision

If the regulated person does not appeal the SFC’s decision within 21 days, the decision will take effect at the time when the period expires.

If, within the 21-day appeal period, the regulated person informs the SFC, whether in writing or orally, that they will not appeal the decision, the decision will take effect at the time the SFC receives the notification.

Appeal to the Court of Appeal

If the regulated person is dissatisfied with the SFAT’s decision, an appeal can be made to the Court of Appeal within 28 days from the date on which the SFAT makes a final decision. The regulated person may appeal only on a point of law and not on whether the SFAT's decision was the right one to make or if the SFAT misinterpreted the facts.

If the regulated person is ordered to pay a fine, the fine must be paid to the SFC by the deadline specified in the decision notice, by cheque made payable to the "Securities and Futures Commission" and sent to:

Please quote the SFC’s case reference which is quoted on the SFC correspondence relating to the matter (eg, 508/EN/123).

Summary only, not legal advice

This is a summary for reference only. It is not legal advice. Regulated persons should seek their own legal advice.